Leatherhead Advertiser reporter David Blackmore is raising money for a bowel cancer charity to help schoolchildren and their parents in South Africa.
He will be taking part in the Bobby Moore Fund’s Project South Africa, which will see volunteers heading out to the African country in March 2010 to renovate a dilapidated school and a football pitch in partnership with the local population.
The project will give the local children and their parents the chance to continue their education in their own village, close to their families, rather than being obliged to move away.
The 22-year-old will be hosting many fundraising events throughout the year and will have a football-themed stall at Ashtead Village Day on June 20.
The West Ham fan is hoping to raise more than £4,000 to go towards the project and also to bowel cancer research.

He said: “With the project taking place next year it makes my fundraising effort even more poignant as in summer of 2010 there will be a little competition called the World Cup in South Africa.

“As I am sure you are aware, one of Bobby Moore’s biggest claims to fame is being the only England captain to have lifted the World Cup.” 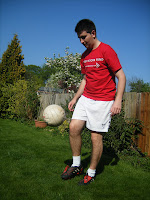 To make a donation visit www.justgiving.com/davidblackmore6 and for more information about the project e-mail david.blackmore@essnmedia.co.uk or call 01306 88 66 90.

In addition, David would also like to hear from local business who are interested in helping him and maybe hold their own fundraising event.