Skip to content
Govia trains, which includes Southern, have now opened its second and final consultation phase for its proposed timetable for beyond Dec 2018, which will be the first time travellers can enjoy the benefits of the major rail investment, including the seven year project to rebuild London Bridge.
There are some useful improvements, such as an earlier first Victoria train and a second morning peak to London Bridge.
Epsom residents should be very pleased as they will see an enhanced and improved service, with new, twice hourly trains direct to London Bridge. Southern note that this “in response to strong stakeholder representation…..We expect these [routes] to be very busy”.
However, it is a different story for commuters in Mole Valley who will see a significant diminution in the evening peak from London Bridge with the axing of almost all direct trains.
Currently, from 1800, there are three direct train services departing from London Bridge for Mole Valley (1803, 1832 and 1929). These trains call at Ashtead, Leatherhead and either Dorking or Guildford.  These trains are very busy, yet they have all been axed.  In future, a re-timed service will go as far as only Epsom. This can’t be a capacity issue at London Bridge so why are they being abolished? 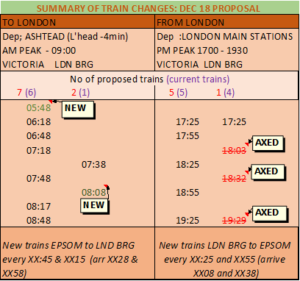 This is clearly a retrograde and divisive step.  Mole Valley residents are having one of their three arterial routes downgraded whilst Epsom residents see theirs improved.  We have all put up with the disruption while the London Bridge project has been underway, now we should all be sharing in the benefits.
The proposed changes will cause significant inconvenience and extend journey times to many hundreds of Mole Valley commuters. Commuting to London is already a long ordeal, please don’t allow Govia/Southern to make it even harder for us especially as this is being billed as an improvement.
The good news is that is still time for ARA and all of us to make strong and immediate representations to Govia/Southern not to axe the three directs trains in its proposed timetable, but we need to be quick. Their consultation window only opened 26 June and closes 27 July 2017. This consultation is for “fine tuning” so please let Southern know that Mole Valley commuters value and want to save their evening peak trains.
Comments can be submitted to gtr.timetableconsultation@gtrailway.com
Please do respond or else we will certainly lose the route.
Above is a summary and links to supporting documentation are below.
New timetable: https://www.transformingrail.com/download-southern-timetables
Existing timetable: http://www.southernrailway.com/your-journey/plan-your-journey/timetables/
Posted in Uncategorized.