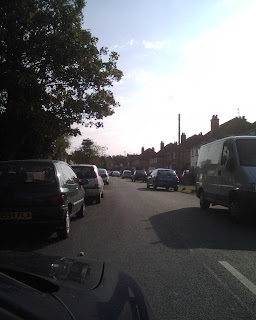 Ray Ward’s articles in the Autumn Newsletter "Parking inconsiderately" has a photograph of traffic parked on both sides of Kingscroft Avenue, making it difficult for larger vehicles to pass along the road, and impossible for fire engine to get through and causing problems for bin lorries. On at least one pccasion, I am told, "they sent a small vehicle on a Saturday morning and they threw all the refuse and paper/card in together!!"

This is hardly satisfactory. When restrictions were, quite rightly, imposed in Bypass Road some two years ago, could Surrey County Council (SCC) not work out that cars would simply shift into Kingscroft Avenue?

In response to the article, I have heard from a resident in Linden Road where – believe it not – when parking restrictions were introduced two years back in several roads (such as Bypass Road) "restrictions on parking in Linden Road were relaxed"! And guess what the resident went on to say? "… since then there have been no end of problems with inconsiderate parking." Was it really beyond the wit of SCC to foresee that would happen?

I am told that in response to complaints from residents in Linden Road, white ‘aitch-bars’ were painted in front of drives about six months ago; but as these things are not enforceable, "many drivers continue to park over them." More worrying still is the fact that this resident finds that when she tries to turn out of her drive "there is often … insufficient field of vision to do so safely (quite a concern with my two young sons in the car). There has been one crash and numerous near misses as a result."

Three times in the past, "Fulvius", one of the Blog’s contributors and a resident of Oaks Close, has blogged about the problems of that road. Incredibly, when restrictions were introduced on neighbouring rounds about two years ago, nothing was done about the road closest to the station! Surely even the dimmest person could work out that problems in Oaks Close would increase? It was either beyond SCC to work that out or it didn’t care.

I will not go over the problems with delivery lorries that Fulvius has high-lighted in the past. The problems with bin collections have continued and now the only way Mole Valley District Council can ensure refuse is regularly collected in Oaks Close is to have one side of the road coned-off every Tuesday evening and the cones removed the following evening. So, if anyone in Oaks Close is going to have their house on fire, they had better make sure it’s a Wednesday!

If it were not so serious, this would be farcical. And I think it likely there are other streets besides just these three that have experienced worsening problems over parking during the past two years.

It is not just that life is made difficult for delivery men, bin men and residents but people’s lives are being put at risk, whether because fire service or ambulance will be held up or because of a fatal accident as some one turns out of their drive. Do we really have to wait until there is a fatality or serious injury before something is done about the parking problems in these (and other roads)?

We said at the time the restrictions were introduced two years back that it would only push the problem into other roads. How right we were! When are we going to have a proper comprehensive parking strategy for Leatherhead?