Please read this email I have recently received from Dr Patricia Wiltshire which I quote below with her permission. Look at the video clip and and consider her last paragraph very carefully.

If you are sympathetic to the fate of the landscape around you, please forward this message to as many of your contacts as possible.

I am sure that many are aware of the changes wrought at Cherkley Court by developers, Longshott. The planning team at Mole Valley District Council advised the Council to refuse planning permission for the construction of a golf course on the land, which is in an area of outstanding beauty, and has stunning views. There were many reasons for objecting to the development, but one major one was because the proposed golf course would destroy vast areas of chalk grassland which is rare ecosystem, both in national, and global terms. Furthermore, the proposed golf course would be virtually contiguous with an existing one, and there is a large number of courses in Surrey already. Longshott failed to demonstrate a need for another golf course in Surrey, and it was considered that local people were unlikely to gain sufficient benefit from its construction. The new course would only be available to the select few who could afford very high membership fees.

The Council ignored the advice of their own planning department and gave permission for the development. Developers have destroyed a huge area of grassland. Have a look at the short video (link below).

The Cherkley Campaign applied for a judicial review, and the judge ruled in their favour. He found that the decision to allow development was flawed. He denied Longshott the right to appeal against his decision. However, not only are they putting together an application for an appeal, the Chief Executive of Mole Valley District Council has announced that MVDC will also appeal against the decision (see attachments).

One must ask whether it is morally acceptable for MDVC to mount an appeal in favour of a planning application from an independent developer when its own planning department advised against it, and a judicial review has also found the decision to be unsound. Whether you care about the chalk grassland or not, one must also ask whether it is right for MVDC to use tax payers’ money to do this.

So MVDC want to see this part of the Green Belt developed for the use of an exclusive few, and has recently expressed the desire to sacrifice Green Belt adjoining north Leatherhead to a housing developer. I find it difficult to believe that the Green Belt is safe under the current regime in the Mole Valley! 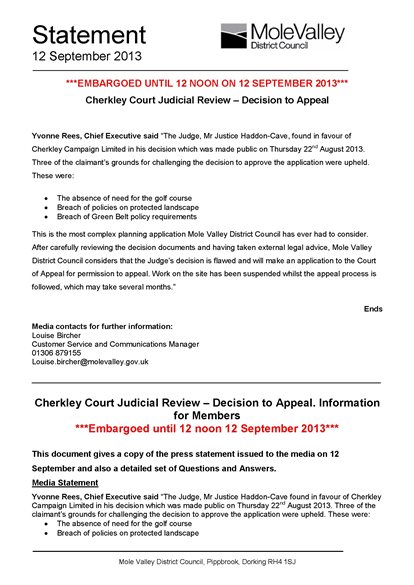 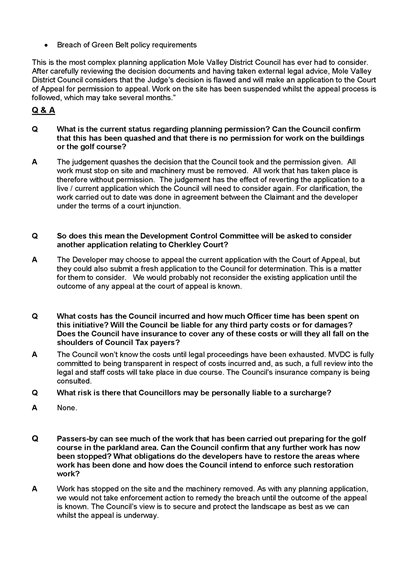 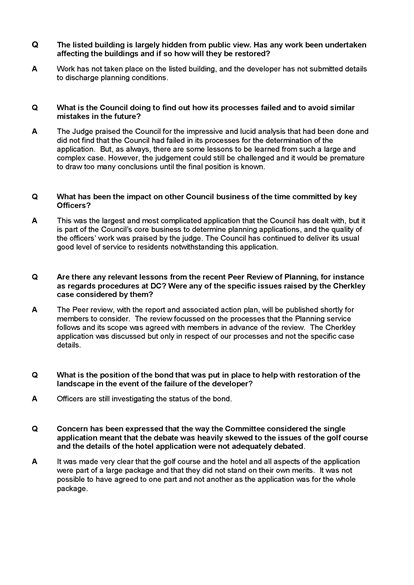