Read about the AGM…

Approval of the Minutes of the previous AGM, 4 June 2018 (see under Reports/Minutes on this website)

Chairman’s Report (as above)

Treasurer’s Report and Accounts (as above)

Documents in brackets above are also visible in the Leatherhead Library in Mansion house, Church Street, and in the the library of the Letherhead Institute at the top  of the High Street from 14 March. 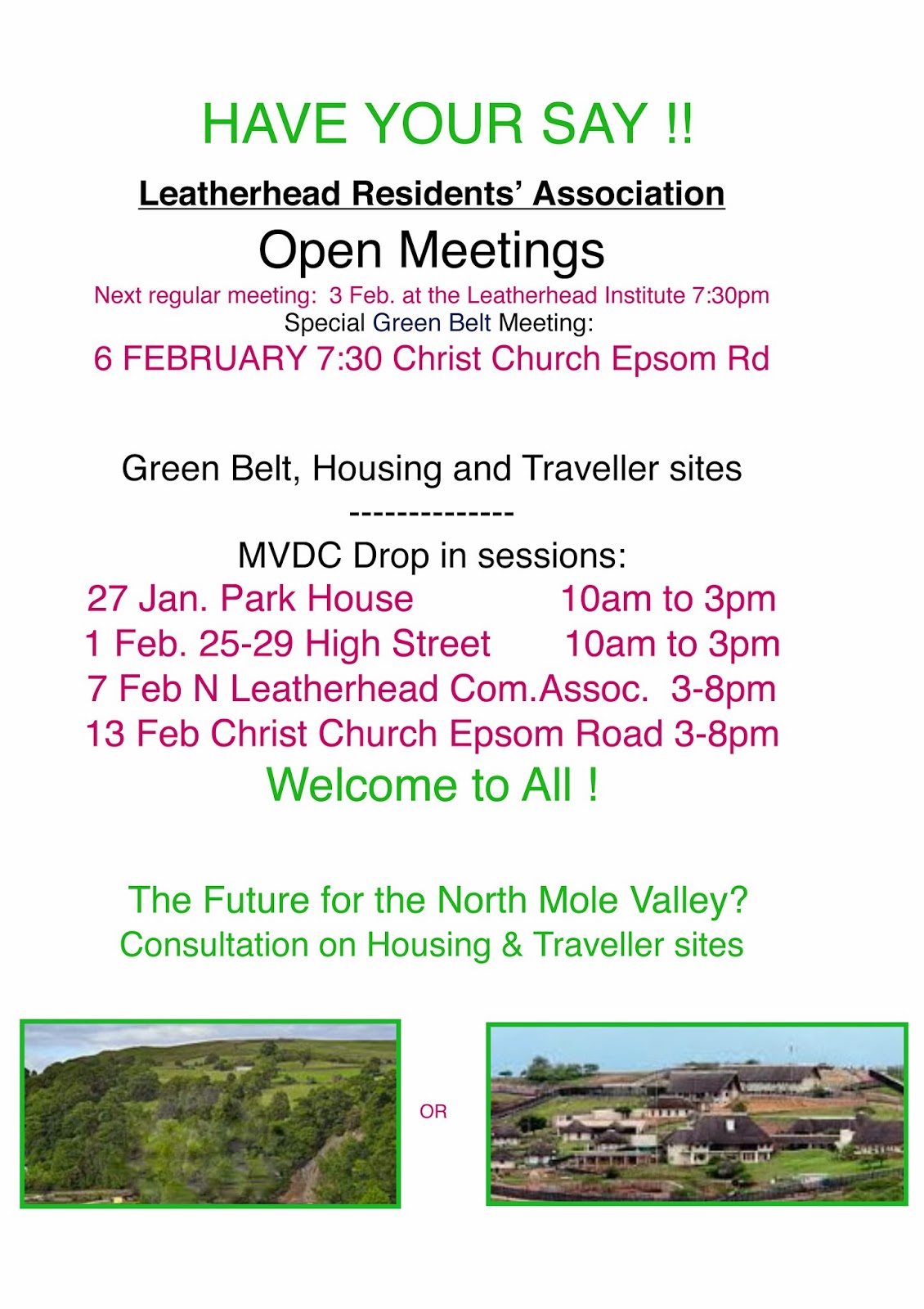 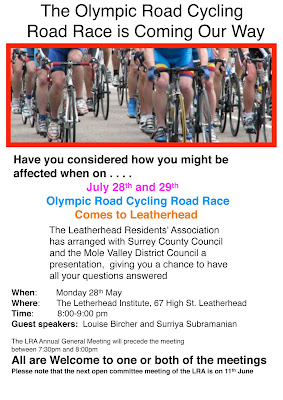 The Presentation on the Olympic Road Cycling Road Race at 8.00 pm follows the LRA’s AGM (17.30 – 8.00); both meetings are in the Abraham Dixon Hall of the Leatherhead Institute.

Agenda, reports etc for the AGM will be posted on the Blog on before the 21st May.

Please note that there are no meetings of the LRA scheduled for earlier in May and the next Open Committee Meeting will be on Monday June 11th (June 4th being a Bank Holiday).

On 29th February at 5.30 in Park House (in the Red House grounds) there will be a special meeting of the Leatherhead & District Forum.

First, Tim Caffell and Colin Langley will tell us about the theatre and its plans for the future. They will also ask us what we might want the theatre to do and how we might help.

Then Chris Wade, Chief Executive of Action for Market Towns, will speak about the achievements of communities in market towns in the UK, and the theme of his talk is "Know Your Place"

All are welcome to this meeting. Parking is in the Randalls Road Car Park and Park House is situated at the top corner of the Car Park, fairly close to the Bull Hill pedestrian entrance.

On page 23 of the Leatherhead Advertiser of the 22nd December there is a short articled titled “Access Denied” which claims to give “clarification.” Sadly, it does not clarify things but rather adds further misinformation in what we are very concerned had become a ‘war of words’ which may be having a divisive effect on the community. I make the following points:

1. No one was denied access to the LRA meeting on the 3rd of December, which was was an open Committee meeting. Anyone, whether a member of the LRA or not, could attend as an observer.

2. The Longshot proposals had been favourably reported at some length at LRA meetings in the July and September, as the minutes show. Also the Summer edition of our Newsletter contained an article largely supportive of these proposals; the Autumn Newsletter also contained reports on the proposals. All minutes and Newsletter are available online:
www.leatherheadresidents.org.uk/meetings.shtml
www.leatherheadresidents.org.uk/news.shtml

3. It should also be pointed out that all Committee members had attended at least one of the impressive and professional presentations given by Longshot’s representatives at Cherkley Court.

4. Therefore, it was felt that the offer from one of Longshot’s representative to give yet another presentation at the 3rd of December meeting was superfluous and, in view of the intention to keep the meeting short, it was politely declined. But there was no exclusion on anyone’s attending the meeting. Indeed, some future presentation may be made, and this will be discussed at the January meeting of BLeAF (Chairmen of the Bookham, Leatherhead, Ashtead and Fetcham Residents’ Associations).

5. After Longshot had formally submitted its application to MVDC, our Planning Subcommittee met and spent some considerable time pouring over the lengthy documentation submitted in support of the application. The Subcommittee produced a report, which had been available on line since 27th November, and this report was presented to the 3rd of December meeting.
Planning_Cherkley_2011.pdf

6. At the 3rd December meeting, one of our own LRA members was allowed to give a ten minute presentation on behalf of the Cherkley Campaign. This was a very modest ‘balance’ to the extensive pro-Longshot representations the Committee has been receiving over the past six months.

7. The vote that took place was made after having received several reports and presentations made on behalf of Longshot, a report on the actual submission made by our Planning Subcommittee, and a ten minute presentation on behalf of the Cherkley Campaign. It should also be pointed out that the vote was by secret ballot, i.e. each member was voting individually without influence of fellow members.

2. Minutes of the 3rd October.

3. Matters arising from Minutes (not covered later in the agenda)

5. To receive and consider reports from:
Environment Subcommittee
Planning Subcommittee
HighwaysSubcommittee
BLeAF (meeting of chairs of Bookham, Leatherhead, Ashtead & Fetcham RAs)
(If any more are received they will be added to the agenda)

6. Any Other Business
(None received so far)

2. Notice of Matters for Any Other Business

3. Minutes of Meeting on 1st August

4. Matters Arising,from the minutes which are not on the agenda below.

6. Reports from sub-committees and from other meetings.

7. Any Other Business (as agreed under Item 2)

Saturday 26th June
Surrey LINK Open Day from 10.00 am –3.30 pm at Denbigh’s Wine Estate
(The Surrey LINk [Local Involvement Network] aims to give residents a stronger voice in how their health and social care services are delivered. Membership is free and open to everybody)
Sunday 27th June
Leatherhead’s annual Duck Race, from 2.00 pm on the River Mole by the town bridge
Saturday 3rd July

"The Big Tidy Up" at Teazle Wood, a woodland of historical interest behind Tesco’s in north Leatherhead, from 10.00 am to 4.30 pm. Food and drink will be supplied throughout the day and there will be a BBQ and presentation after the event. Meet at Tesco’s on the day.
Monday 5th July
Meeting of the LRA at 7.30 pm in the Leatherhead Institute

Police report, after which
Andrew Bircher (Corporate Head of Service, Planning at MVDC) will discuss the Council’s ideas and how we, the residents, can become involved in the future Leatherhead Town Centre, and of the High Street in particular.
Monday August 2nd
Meeting of the LRA at 7.30 pm in the Leatherhead Institute

3. Matters Arising from the Minutes 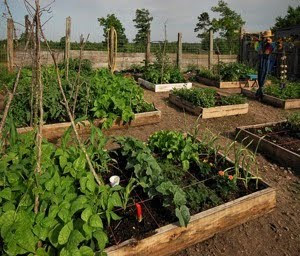 5. Reports from sub Groups:
a) Membership
b) Planning
c) Highways