Skip to content
Dear All
Following their first leaflet drop earlier this month , Prudential RideLondon-Surrey have confirmed that they would like to hold a number of drop-in sessions in Surrey in order to engage with our residents and businesses about the Prudential RideLondon-Surrey 100 and Classic events on Sunday 4 August.
As the final details of the route will not be known until end June, and RideLondon are planning a second leaflet drop in very early July, these sessions have been planned to tie in with these factors to ensure that the sessions can be as useful as possible and are therefore scheduled for the first 2 weeks of July.
4 drop-in sessions have been secured for Mole Valley. These will be attended by Prudential RideLondon, MVDC, SCC and hopefully Transport for London.
I would be most grateful if you could assist with publicising these events to our residents please. More information about Prudential RideLondon can be found at their website www.prudentialridelondon.co.uk or on the GoSurrey website at www.gosurrey.info as well as on our own site www.molevalley.gov.uk
Thank you
Kind regards
Louise
Louise Bircher
Customer Service and Communications Manager
Mole Valley District Council
Tel: 01306 879155
www.molevalley.gov.uk
Follow us on Twitter @molevalleydc

Prudential RideLondon-Surrey 4 August 2013
Resident and business engagement drop-in sessions.
All timings are for actual engagement time. Please allow an additional 30 mins either side for set-up and take down.

Leatherhead is now under great pressure to release Green Belt Land so as to take urban expansion from London. When in 2009, the Council agreed to provide so many new homes under the South East Plan – that was for the South East Region – not for the London Region. These target figures relate to the whole of Mole Valley, not just that area in the north of the District. They should have been rejected by our Councillors.

Too many of our organisations in this Town are for the Leatherhead District, including Ashtead and Bookham. Therefore they are not constitutionally able to join forces for the sake of the Town alone. We need to stand together shoulder to shoulder with other members of the Leatherhead Conurbation (to avoid confusion with the word District). So we need 40 or more, honest citizens who care, to come forward NOW and fight a combined defence of our Town in a new Neighbourhood Forum, according to the Localism Act. We cannot trust our Council any longer.

Volunteer now, for the sake of the Town by sending your contact details to me. Hubert Carr (email:hubertcarr@gmail.com)

Leatherhead has had a cottage hospital for over 100 years , the first hospital being at 8 Clinton Road in 1892 and consisting of 8 beds , followed in 1902 by the Queen Victoria Memorial Cottage Hospital at the junction of Epsom Road and Fortyfoot Road now a block of flats Victoria House. The current hospital was built in 1940 and had originally 52 beds now reduced to 23.

At the moment we are at the watershed as to the future as on 1st April this year the NHS has undergone major restructuring with  budget control being transferred to Clinical Commissioning Groups ( CCG )  and the estate of the hospital  transferred to a Government agency.

Come  to the League of Friends of Leatherhead Hospital  AGM at 8.00pm in the Parish Church Hall on Friday 31st May. All residents welcome.

(Posted by LRA  Committee in support of League of Friends)

Surrey County Council is currently undertaking a review of the planning service, which is responsible for determining planning applications for minerals, waste and county council owned developments such as schools and libraries. The aim of the review is to identify and implement service improvements that will deliver an enhanced planning provision to all users. Planning is facing significant changes both in legislation and demand so we want to ensure that our service is prepared and processes are effective and efficient.

As a stakeholder in the Council’s planning service we would value your input and therefore wish to invite you to take part in this short survey so that we may understand your views and potential issues concerning the Council’s current planning process in relation to your role.

Please use the link provide below, which will guide you to the survey titled ‘Planning Review –Stakeholder Survey.’

We would be grateful if you could submit your response by Friday 31 May 2013.

If you require any further information then please do not hesitate to get in contact with myself or alternatively you can contact the project manager Dominique Stephens (Dominique.stephens@surreycc.gov.uk)

Here is a report on what happened:

The day as it unfolded.

6. Meetings attended/reports not included above:

4.  Anything useful or interesting from Bookham R.A.

We are local residents who live in the south of Leatherhead. We enjoy living here because Leatherhead is an urban area set in very special countryside.  So imagine our horror when we found that developers have suggested to Mole Valley District Council that they re-draw the green belt boundary south of Windmill Drive and Yarm Way; beyond Downs Lane and all around Givons Grove.

If this land is released from the green belt then developers  will build housing estates of literally hundreds and hundreds of houses. The implications for Leatherhead residents are serious and time scale very short – just a few months.
We have therefore set up a campaign to fight this and we ask for your support.  We need to work together so we can demonstrate to the Councillors that we are united and, hopefully, a force to be reckoned with.  We:
If you would like to know more, or, if you would be willing to help by writing a letter please email Irene and Ian on SaveSouthLeatherhead@gmail.com
Adult Learners’ Week is the biggest annual learning festival in the UK.
This year  libraries will be using the festival to promote our “new look” IT learning offer. Whether you are completely new to computers or want to discover how to make the most of the internet and develop your skills there are plenty of options to help you.
Key to the offer is a range of online learning resources available through the library and from home for independent learners. Check out the free resources on our library website www.surreycc.gov.uk/libraries/learning.

For the not so confident, we offer free supported group sessions where you can:

For more information about the free group sessions for beginners please ask at your local library:
Addlestone, Ashford,  Banstead, Camberley, Caterham Valley, Chertsey,Cranleigh, Dittons, Dorking, Egham, Epsom, Ewell, Farnham, Godalming,Guildford, Haslemere, Horley, Leatherhead, Oxted, Redhill, Staines, Sunbury,Walton, Weybridge, Woking.
If you require further help with the internet you can make an appointment with one of our volunteer Computer Buddies who can offer free individual support.
We’re also looking for volunteer Computer Buddies who can spare a small amount of time to help others learn new IT skills. Visit our library website for more information about the role of a volunteer Computer Buddy.
To find out more about our online learning opportunities, talk to a member of our library staff, call 0300 200 1001 or visitwww.surreycc.gov.uk/libraries/learning.

So asks Katie Hannant in today’s edition of the Leatherhead Advertiser (page 18, ‘Your Views’).  That is exactly the question that many of us have asked time and again over the past year.  In my view, and I was there, the meeting of MV Development Control Committee on 4th April last year, at which the Officers’ recommendation was rejected, was farcical and a poor reflection on local democracy.

I have stated before that it is my opinion the application should have gone to appeal.  But,  Development Control Committee having granted Longshot’s application, Keith Taylor, the Green MEP for Surrey and the South East, was quite right to urge the Secretary of State, Eric Pickles, to call in the Cherkley Court planning application.  Unfortunately, Sir Paul Beresford, our Westminster MP for Mole Valley, urged Mr Pickles not to do so and, indeed, Mr Pickles did not call it in.  There seems to have been every attempt made locally to make sure this application remained in the hands of MVDC alone.

If you do read Katie Hannant’s letter in the Advertiser, do read Mrs Krikorian’s letter also.  She makes several very valid points and also makes it clear that there are a large number of objectors, contrary to propaganda that objectors are a small minority.

As for so-called delaying tactics, work is going on a-pace,  as both letters in the Advertiser make clear and, indeed, as anyone can see for themselves if they care to take a walk across the Cherkley estate.

The judicial review on the 6th and 7th of June is not an attempt to delay things; it is an attempt to have the planning permission quashed.

Even if the judicial review is successful, sadly the damage already done will take many years to be put right.  If, however, the judicial review fails, then we shall have this unnecessary golf course in a county already replete with golf courses and the green light will be given to councils everywhere that Local Plans can be ignored at will.  They will not be worth the paper they are written on. 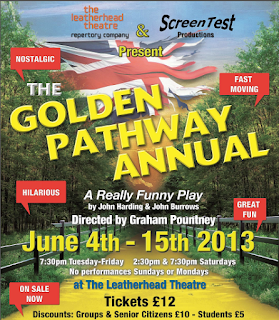 THE GOLDEN PATHWAY ANNUAL
by John Harding & John Burrows
Directed by Graham Pountney
The Golden Pathway Annual is a brilliantly funny, touching, nostalgic and often Pythonesque look at the Baby Boom austerity years of the 1950s and the swinging 60s. A series of
loosely connected fast-moving sketches whisk us through the life of Michael Peters from the age of 2 to 23. Michael is given The Golden Pathway Annual on his 5th birthday and its
fictional characters erupt into his real life as he grows up through the Coronation, Grammar School, adolescent awakenings, alienation from his parents, tries to find a job and
encounters a large chicken!
The show is a spectacular trip down Memory Lane for those who were there and a glimpse into another world for those who weren’t, all wrapped up with lots of comedy and touches
of pathos. But it’s more than that: every scene is brilliantly written, the majority hilarious, the rest genuinely moving. ‘The Golden Pathway Annual has things to say, says them well, looks you in the eye.’
Plays and Players review.
In short, it is fantastic.
1950s and 60s
You weren’t there? It’s perfect entertainment for anyone over 12!
Can’t remember them? You will now!
From June 4 to June 15
in the Casson Room Studio
Leatherhead Theatre
7:30pm Tuesday – Friday 2:30pm & 7:30pm Saturdays
No performances Sundays or Mondays
Experience this uplifting show from just a fiver!
Tickets £5 & £10 with Student/Senior concessions
Standard £12 tickets – discounted to £10 if you buy 3 in one transaction
Box Office Tel: 01372 365141
www.theleatherheadtheatre.org
Leatherhead Theatre, 7 Church St, Leatherhead, Surrey KT22 8DN
Book now – space is limited!