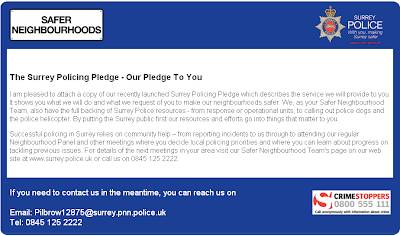 What will the work involve? Bus Stop Improvements
How will my route be affected? Kerb and footway to be restricted

Who has been informed about the roadworks? Information on the web (???)

Who is doing the works? Surrey Highways Partnership

National Science and Engineering Week is part of the ‘Science: [So What? So Everything]’ campaign which aims to show people how science benefits our everyday lives, is crucial in strengthening the UK economy and meeting some of the major challenges of our time.

Leatherhead & District was officially twinned with a small town in the North West of Paris called Triel-sur-Seine in 2004 following informal exchanges that had taken place on a regular basis since 1992. Every year there are exchanges between groups in our area and groups in Triel.

Our last exchange visit was a great success, our biggest and busiest ever with a 55 French vistors travelling by coach to visit us. The next Exchange Visit will be taking place from Friday 23 May to Monday 26 May 2009 when we will be travelling to Triel. More information can be found here.

There is great enthusiasm in Triel to link up with local organisations over here – representatives from French churches, choral societies, football clubs, schools and a host of other organisations in Triel are keen to foster links with similar organisations in the Leatherhead area. The twinning committee would be delighted to hear from any local groups who would like to join the ‘Friends of Triel’. On a more personal level, the welcome and hospitality encountered by the various groups who have visited Triel over the years is always warm and generous. The committee are keen to expand the membership of the ‘Friends of Triel’ and would welcome any individuals or families who would like to join as new members. 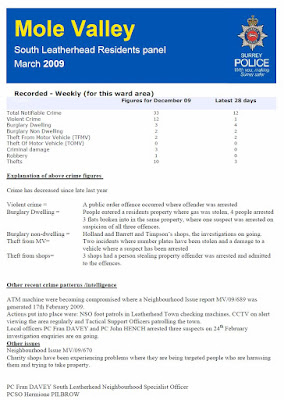 We are indebted to John Hampton for auditing these Accounts.

The Leatherhead Residents’ Association has a very healthy bank balance at present, including a ‘General Reserve’ of £3000 – the amalgamation with the Leatherhead Society providing this. The three year membership fee, that the majority of our members have paid, has to be split over a three year period in the accounts – a third of it is transferred to the Income and Expenditure account each year and this is the amount of money that can be used for that year, together with the one year membership fees and any donations.

In order to give our members good value for their membership fee, anyone joining the Association after 1 September each year is recorded as being a member from January the following year and therefore receives four months free membership. Membership fees received in advance therefore go into the accounts for the following year – expenses of course for those four months still go into the accounts for that year, and this is why the Income and Expenditure Account and Balance Sheet show a deficit, when in fact the bank balance is healthy.

As the LRA started up from scratch eighteen months ago, there have been some startup expenses, such as starting up the Road Steward system based on the system used by the Bookham and Ashtead Residents’ Associations. These associations have found that a network of road stewards is the best way of maintaining a high level of membership, which is vital if the Leatherhead Residents’ Association is to represent the views of the residents to the local council and town forums etc.

Now that we have established a system for running the Association and for getting more members, we have made some changes and should not be incurring the amount of expenses we have had over the last eighteen months. However, we still need to set up more Road Stewards and the membership fees will also be used to cover the cost of hiring the meeting room, printing membership forms and of course producing the newsletters.

Due to the inspiration of David Smith the Residents Association was re-vitalised from the remaining nucleus of the Leatherhead Society, and thanks to the hard work particularly of Paula Sabine and Fran Barnby the membership has grown from two to five hundred households. Ray Brown set us on course with the establishment of our Website and we now have the excellent support of our Webmaster John Bleackley.

I am not going to bore you with a summary of the events of the past eighteen months. All members have received our newsletters and those who have access to the Website have a regular update of minutes and are aware of our concern with events in the area concerning planning, parking, the High Street, the River Path, Epsom Hospital, transport and the Core Strategy – future planning for Mole Valley.

My task is to thank members who have supported our meetings, Roy and Cheryl Allen and Caroline Brown for their support to local residents and their concerns over planning issues.

Over this past year that has been a considerable increase in concern over consultation, MVDC has provided training for Residents Associations concerning planning, but the situation still continues of proposals concerning the High Street where consultation has not been extended sufficiently to residents who are concerned over the obstruction to comfortable and safe access through the High Street, due to clutter of A boards, chairs and tables, parked cars and the sad state of the paving, drains and rough cobbles. However there appears to be action planned to improve this situation.

Changes have been made in the methods of providing information and consultation. We no longer receive paper copies of minutes and Agendas of the MVD Council meetings, and now have to rely on the Internet. The introduction of Council controlled Forums, in our case the Ashtead and Leatherhead Forum, has led to concern from all four district Residents Associations in the North of Mole Valley, who all agreed the importance of maintaining the Leatherhead Town Centre Forum as a means of sharing our mutual concerns. This has led to a change of name and will now be known as the Leatherhead and District Forum.

The LAP now intend to centre their aims on supporting local organisations, which will ensure that projects are put forward that are hopefully not likely to cause contentious opposition. That is my interpretation of the decision. The LAP reports to the Leatherhead District Forum and it also has established links and incorporates representation by local Council Officers and County and District Councillors, at present these are Tim Hall and David Sharland.

Another change intended to involve greater public in-put to influencing services is the establishment of Local Involvement Networks, which replace the Patient and Public Information forums. Members of the public are invited to monitor both Health and Social Services. Surrey LINks is in its first year of establishing committees and I serve on the communications and mental health groups.

The Government have also decided that greater concern should be taken in the views of people of age 50+, and the establishment of local a regional forums through Age Concern and the amalgamation of Age Concern and Help the Aged are again adding to a volume of meetings, not to mention the Co-design meetings held by the Surrey Primary Care Trust concerning the provision of services at Epsom Hospital. The outcome of these is to be announced on Wednesday at Epsom Town Hall.

Challenges: The recent announcement of MVD cuts in subsidies and increases in charges, in the current credit crunch, leaves us all aware of the need for not only tightening our own belts, but also the need for extra support both by volunteers and petitioning and fund-raising. One advantage of the concerns of climate change and considering reducing the effects of CO2 emissions is that it involves reducing expenditure, although sometimes it involves initially increased installations costs. The arrival of 1400 employees to Unilever in Leatherhead has increased the road and parking problems, but hopefully helps to support our local shops.

This last Saturday a number of voluntary and service organisations took part in a health and community event jointly promoted with Mole Valley 50+. Apart from providing information useful to a number of residents on issues of finance, carers concerns, health, transport and volunteering, there were a number of suggested ventures, which will present us with challenges:

As increasingly the means of communication becomes focused on e-mail and the Internet, I find myself involved with communication to a variety of organisations with members, who do not have access to the internet, either due to age, health problems or lack of income. I have reluctantly decided that I cannot cope with the increase of commitment that I have undertaken and have decided to step down from the chairmanship of the Residents Association, knowing that there are others with greater computer skills and experience of local government than myself well able to take over. I will continue to support the committee and look forward to the challenges that are inevitably going to keep me busy with your help.

The works of Shakespeare have been performed, since 1951, in the Open Air Theatre at the National Trust property Polesden Lacey, near Bookham in Surrey. The theatre was created in the grounds of this country mansion through the work of the Bookham Community Association. Performances of Shakespeare’s plays have been part of the summer festival under the umbrella of the National Trust. A new company, Polesden Lacey Shakespeare, has been formed to carry on this tradition. The National Trust continues support for our future plans but we need to find extra funding to help us progress our activities.

This year we present ‘A Midsummer Night’s Dream’ on Saturdays 11th and 18th July and Sundays 12th and 19th July starting at 3pm. The production is directed and adapted by Margaret Hunter to make it accessible to all audience members young or old, with entertainment before and during the interval. Dorking Hall Box Office (01306 881717) have kindly agreed to act as our booking agency. Sale of tickets will commence on 2 April. Further information is available on www.polesden.co.uk.

We have obtained an amount of funding but would of course welcome further support. A team of local professionals have been drawn together to prepare for the productions not only from the artistic but also the commercial point of view. We would like to grow the strength of Polesden Lacey Shakespeare to provide, in these idyllic surroundings, Shakespeare for audiences from the local community, London and the South East.

Last year the National Trust launched the Friends of Polesden Lacey Shakespeare. We have now taken it over from the Trust and are inviting public help to build the future of this much loved local tradition. We have taken over the website that was used for the festival and invite those interested in becoming a Friend to ring 01372 453638 or visit www.polesden.co.uk, for a joining form.

Whatever you choose to do, we do hope you will come and enjoy this enchanting play in the glorious surroundings of Polesden Lacey.

With all best wishes from
Margaret Hunter and Polesden Lacey Shakespeare

The Leatherhead Residents Association AGM will be held at the March open meeting on Monday March 2nd, following the Police Report at 7 pm.

The meeting will be held at the Letherhead Institute.