Mole Valley claims to have one of the highest dry recycling rate in the UK. How can this be improved further?

A number of consumer items such as foil, cartons & batteries can only be recycled at the MVDC Recycling sites. Why not place small recycling bins for these items close to places that people go on a regular basis e.g outside Sainsbury’s/Lidl & Tesco? The collection bins do not have to be that big – they can be collected with other waste on a daily basis and the bins wheeled away for safe storage overnight.

Citizens of Mole Valley are far more likely to visit the Supermarket than the tip. The Recycling Sites are not that accessible if you don’t have a car. Get the supermarkets involved – after all they provide the goods in the first place – it will look good for their image also. The Plastic Bags collection bins are well used in-store and so this indicate that folks are willing to bring recyclables to the shop with them.

Dear Sir/Madam
As part of its work programme for 2008/09, Mole Valley District Council’s Scrutiny and Audit Committee has set-up a Transport Panel to investigate the current public transport provision across the District.
The Transport Panel feel that before they meet with the relevant service providers, it would be useful to meet with local public transport users to get the views of the people who use these services and try to identify realistic improvements that could be made.
To enable the Panel to meet with residents they have arranged to hold two focus groups. One on Wednesday, 18th February at 7.00pm at Park House, Leatherhead and the other on Monday 2nd March at 7.00pm at the Council Offices in Dorking.
So if you have an interest in public transport in Mole Valley the Chairman of the Transport Panel, Councillor Tim Hall, would like to invite you to attend either of these meetings to share your views.
Alternatively, if you know of anyone else that would be interested in attending, please let them know.
If you have any further questions, or would like to confirm your interest in attending, please don’t hesitate to contact me.
Yours Sincerely
Simon Trevaskis
Senior Democratic Services Officer
Mole Valley District Council
Tel: 01306 879384
Email: simon.trevaskis@molevalley.gov.uk

“Many people in our community are facing financial troubles. We believe that the Citizens Advice Bureau provides a crucial role in helping those people. Consequently we have decided to ensure that the CAB gets the funding it needs in the coming year, so that it can continue with its excellent work.”

• Car parking charges – the charges for Dorking and Leatherhead will be 60 pence per hour for each of the first 5 hours, but the 2 hour charge will be reduced from £1.20 to £1.

• Allotments – allotment charges for 2009/2010 are already agreed for the next 12 months. However Mole Valley is considering a modified concession scheme for 2010/2011 which will be extended to those in receipt of benefits.

• Use of Park House, Leatherhead – the new charge for using Park House will be limited to £47 per session.

“We never stop listening to what our residents are saying. Our car parking charges have remained steady for the last few years, but we recognise that more needs to be done to help our local businesses. These are difficult times, but we’ve tried to strike a balance between savings and higher charges so that Mole Valley remains a top quality council. To fund the above changes, we are proposing to increase the Band D Council Tax by a further £2 per year. We will continue to have the second lowest rate of Council Tax in Surrey.”

A note for dog owners using the Linden Pitt Path:

The Linden Pitt Path is not a Dog Toilet.

This path is used extensively during the day by children & parents. If your dog does foul the path…

Perhaps SCC can liaise with MVDC and put up anti fouling signs & a ‘poo’ bin when the path is modified in coming months.

To complain about the state of the path try:

Regular users of the Linden Pitt Path will have noted the ‘White’ notices from SCC have been posted up along the path. SCC plans to widen the path from the Grange Road entrance to the end of St. Andrews school property. The width will increase by one metre on the St. Peters school side.

The modifications will involve removing the trees along the St. Peters side of the path. New trees will be planted. The trees will be removed during half term and the widening will take place in the Summer holidays. A temporary path will be put in place that runs parallel to the Linden Pitt Path. From the diagram on the notice, it appears that the temporary path will run through St. Andrews school grounds.

Yesterday (Wednesday) parents trying to use the ‘preferred’ route to schools in North East Leatherhead (Grange Road), found that the poorly gritted paths of this link made the way too dangerous to use. This route uses the the pedestrian bridge over the M25, which links the St John’s Gardens to Ottways. This meant parents were forced to go round the houses and brave the Knoll Roundabout.

Another irony here is that the path is right next to a major gritting depot. 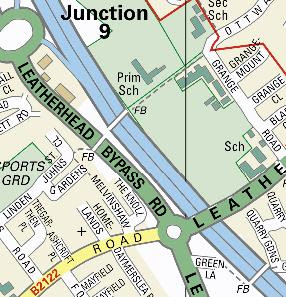 Burglaries generally increase over this period but Im pleased to say that we only had four over the festive period which is low compared with other areas of .

We have tried to spend as much time as we can on the estate and hope people have seen us. I am unaware of anti social behaviour in Randalls Cresent over this period.

On New Years Eve there was an altercation on . This is believed to have spilled out from a party on Randalls Cresent. A 19 year old male suffered quite severe facial injuries.

One local male has been arrested and released on Police bail while enquiries continue. If anyone has any information about this please speak to me afterwards.

I mentioned last month about the assault on where a male was hit with a bottle. One male has been arrested with a second to follow shortly.

With regards to the hatchings at the crossing close to Clements Mead, I have moved a number of cars off from this area and will continue to do so.

With regards to vehicles speeding down Clements Mead, I have spoken with our Casualty Reduction team and they are currently dealing with speeding issues in other areas of but will have a look at Clements Mead as soon as they can.

I was told about the coach that parks outside Onestop last month. I have spoken to the head office of the coach company and the coach has not been seen since.

I have spoken with the manager at Ashtead Plant hire and he has agreed to speak with all his drivers and try to stagger their deliveries. Has this made any difference?

We have received a number of complaints from residents close to Esso petrol station about “boy racers” causing problems in the early hours of the morning on the forecourt. These same vehicles have been seen doing “doughnuts” in Tescos car park.

We have created this as a neighbourhood issue and issued banning orders from Esso to the offending vehicles.

I propose to target this for the following month.

Garage Watch is a new incentive created by local officers in Mole Valley North. There has been an increase in offences where petrol is taken from petrol stations without payment being made. We are creating a link between local police and petrol stations aimed at sharing information on vehicles used in these crimes and people committing the offences.

We received a report from residents about drunken parties which became out of hand and of anti-social behaviour in the Linden Road and Lime Close areas of Leatherhead South. Following further enquires we created links and liaised with partners from the local housing team to resolve issues. The unwanted visitors were moved off the site and the building is now secure awaiting the return of the tenant.

A Panel Meeting is where members of the community can come along and meet their local police officers and their partner agencies. There you can find out what is happening in your area, and more importantly you have the opportunity to give your point of view about local policing or services and voice your concerns.

We are lucky to have the opportunity to work together in partnership with the Leatherhead Residents and share the same meeting which is on the first Monday of every month at 7:00pm in The Institute, at the top of the High Street.

Please do come along, everybody is welcome.

The Safer Neighbourhood Team are contacted on a regular basis by residents who wish to discuss general road improvements such as yellow lines, hatchings, road widening, signage, footpaths etc. Surrey County Council Highways Department are responsible for all of these issues and not the Police; their phone number is 0300 200 1003. The Safer Neighbourhood Team cannot enforce parking on yellow lines – this is carried out by the Traffic Wardens from Mole Valley District Council, phone number 01306 885001. If you have a problem with cars parking in a dangerous position or causing an obstruction then this is an issue for the Police and it needs to be reported to us to deal with. However it may be wise to report ongoing parking issues to Highways or your Local Councillor who may be able to seek a long term solution. Road improvements will not be implemented unless residents and road users raise the problem in the first place.

If you feel that there is a problem with excess speed in a particular road in Leatherhead then this needs to be reported to PCSO Peter Yard who is the Casualty Reduction PCSO for Mole Valley. He can then arrange for a traffic survey and consult with Highways to discuss potential road improvements and solutions.
If you are interested in a Speed Watch scheme then please contact PCSO Yard for more information – his details are on the Mole Valley page.