Discussions have been going on concerning amending and updating the constitution we “inherited” from the former Leatherhead Society in order to make it more appropriate for our new Leatherhead Residents’ Association. A set of amendments for the complete overhaul of the constitution is now ready. This was published on our website this morning. If you have not seen this, return to the home page and click on the menu bar.

As well as reading the set of proposed amendments online, you can also download them in PDF format. There are, in fact, two PDF versions: one simply states each amendment and gives the amended clause in full (i.e. just like the web page); the other gives all this as well as the rationale for each proposed amendment.

The minutes of the July Meeting of the Association may be viewed and downloaded from the ‘MEETINGS’ page. It should be understood that these are at present DRAFT Minutes and will be presented to the 4th August Meeting for ratification.

Progress has been good. The entire length of the path and the sub-base has been laid and some attention is not being given to the installation of the barrier at the Thorncroft Bridge end and the seating. The top surface of the path will be laid at the beginning of next week, we hope. The weather forecast for this week is not encouraging and we are reliant of dry conditions. The contractor has done a nice, neat job with little disturbance to the vegetation on either side of the new path.

Previous posts on the subject:

A resident recently asked what happened to MVDC’s plan to implement a Controlled Parking Zone (CPZ) in Leatherhead.

Mole Valley’s Parking Strategy was outlined in 2006. SCC looked at the proposal in March 2007.

Last year the the Leatherhead Advertiser reported that the scheme in Dorking had had some difficulties. (link required).

The CPZ in Dorking is giving some problems which you will have read about in the press. Only when these have been resolved will the Leatherhead area be considered. Nothing will be considered for Leatherhead until Dorking’s is up and running.

Does the Residents Association have any views on the Subject ?

We recently added the News Feed for Surrey Police on the Blog (see right hand column).

Other sources of Police news for Leatherhead are :

You may have seen the signs up on the approach roads to the Town Centre….

A chance to stock up on olives, smelly sausages, baguettes etc. The Leatherhead Life website has a list of other events coming to a high street near you… Here is a tale that demonstrates problems that individuals may encounter when dealing with SCC Highways. This was sent in by a Leathehead resident, but the problem with SCC is not uncommon.

The rather complex notice indicated that the stretch of road from The Cresent to Byron Place would be closed to traffic for the weekend of 26th April. The direction of traffic on the remainder of Church Road would be reversed. Church Road is a one-way street. A number of residents thought that the notice was unintelligible. A fax was sent on 16th April to SCC to ask for clarification & perhaps a simple diagram. There was no response from SCC.

On the 25th April 2008, “Advanced” notification signs were place at the junction of Church Rd & the Crescent warning of the pending roadworks. The following day contractors, turned up dug a trench across the 4m stretch of road & a big hole in the pavement by the Samaritans (7 Church Road). The trench was cover and a rough tarmac surface added by the end of the day. The hole in the pavement was filled & a rough surface of tarmac added; the paving stones were taken away.

The following day, Sunday, the contractors turned up and removed the traffic restrictions. No further work was done. Now one useful piece of information did come from all this . In the phone call on the 20th June 2008 with SCC, the lady answering the phone at SCC did say that the contractor doing the work ( a large energy company from over the Channel) was a law unto itself. SCC have no control over them and they do whatever they please when they please.

Hole filled in but no paving stone – back to the original state of affairs. Following a further web enquiry & a direct mail to SCC MV Highways Manager, an email was received from SCC stating that they had had a lot of problems contacting EDF and their contractors. An SCC officer went to the site yesterday (07-07-2008) and managed to speak to the contractors.

I mentioned to them that the kerbstones needed to be replaced and they agreed but did not have any indication of that on their job sheet. They have told their manager to order new kerbstones and install them this week. 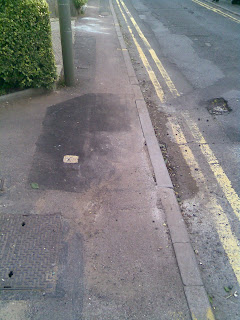 Dorking & Leatherhead are connected by a very good cycle lane. It is about four & a half miles long and very safe for about 95% of it’s length. The problem is that on arrival in Leatherhead, cyclist are faced with a choice of either:

Each of these routes has problems and dangers.

The Government is trying to encourage cycling to get folks out of their cars and so SCC should make cycling as safe as possible. Better protect need to be afforded to cyclist choosing to the Gimcrack Hill route.

Please can the LRA put this on it’s list of things to discuss at one of LRA meetings (August).